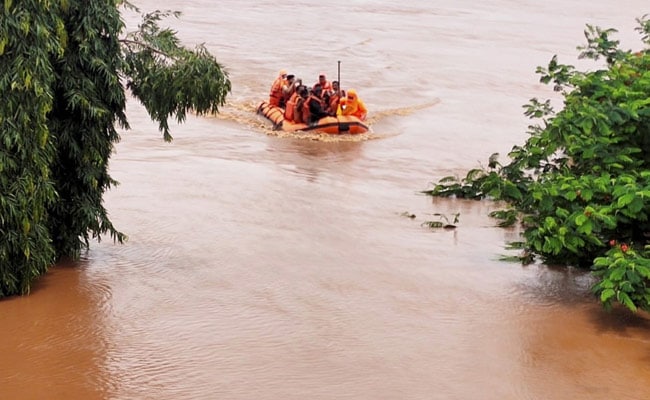 The village Dur, with a population of 1,500, was completely cut off by the flood waters. (Representative)

Sahil Waghde, a resident of Tohogaon village, was rescued on Saturday by a joint effort of the local gram panchayat, Maharashtra Forest Development Corporation (FDCM), police and district administration. Firoz Pathan, former deputy sarpanch of Tohogaon village, said Sahil was suffering from fever and was undergoing treatment at the local primary health centre, but his condition worsened in the last few days.

The village in Gondpipri taluka, which has a population of 1,500, was completely cut off from the surrounding villages due to flood waters following incessant rains in the district since the beginning of this week.

The backwaters of the Wardha river blocked the village of Tohogaon, which was surrounded by flood waters, the access road being a forest patch.

“The doctor who was treating Sahil at the primary health center advised that he be shifted to a hospital in Chandrapur. I contacted the Tehsildar of Gondpipri KD Meshram to inform him about the emergency. Roads due to flood waters Due to the blockade, the tehsildar decided to reach Jharan village through a jungle patch through Kanargaon Camp No. 4,” Mr. Pathan said.

Though the Tehsildar traveled 25 km on a forest road with an ambulance on Friday, he could not reach the village as a tree had fallen on the road, blocking it. He said there was no manpower to clear the way and he was forced to return.

“Later we approached the forest department to clear the road. The department also alerted the Kothari police station in-charge and the FDCM, who removed the fallen tree late in the night,” Pathan said.

On Saturday, Sahil and his father were brought to the forest patch in a small boat from where the police and the Tehsildar shifted the boy to Chandrapur Medical College and Hospital in an ambulance, they said.

Talking to Press Trust of India, Tehsildar Meshram said, “I called the doctor in-charge of Tohogaon Primary Health Center where Sahil was admitted and he told me that the boy’s condition was getting serious and he had symptoms of malaria and dengue. are visible.” Tohogaon and some other villages are still cut off due to flood waters. The boy had to be rescued through a forest path, where he could be reached by boat, the officer said.

Meshram said Pathan, a Tohogaon villager, FDCM officer and police inspector Tushar Chavan worked day and night to clear the way and ensure that Sahil was brought out safely.

Should you buy multi-year health insurance?