It is May 11 and the seventh day of Chhattisgarh Chief Minister Bhupesh Baghel’s ongoing Bhent-Mulkat (a cordial meeting) campaign. As soon as the helicopter carrying Baghel and his team of ministers and officers touches the Mangarelgarh village in Ambikapur district, it triggers a flurry of activity. Villagers thronged to welcome the high-profile guests who came to take feedback on the government’s schemes. On the advice of local MLA and Food and Civil Supplies Minister Amarjit Bhagat, Baghel walks from the helipad to the temple dedicated to the deity Mangelgarhi, after which he settles under a makeshift shed with thatched roof made of sal leaves. “Is everyone’s farm loan waived off?” He asks the villagers. “What do you do with the good money you earn by selling paddy to the government?” After hearing mostly positive responses, Baghel turns into some mild jokes.

It is May 11 and the seventh day of Chhattisgarh Chief Minister Bhupesh Baghel’s ongoing Bhent-Mulkat (a cordial meeting) campaign. As soon as the helicopter carrying Baghel and his team of ministers and officers touches the Mangarelgarh village in Ambikapur district, it triggers a flurry of activity. Villagers thronged to welcome the high-profile guests who came to take feedback on the government’s schemes. On the advice of local MLA and Food and Civil Supplies Minister Amarjit Bhagat, Baghel walks from the helipad to the temple dedicated to the deity Mangelgarhi, after which he settles under a makeshift shed with thatched roof made of sal leaves. “Is everyone’s farm loan waived off?” He asks the villagers. “What do you do with the good money you earn by selling paddy to the government?” After hearing mostly positive responses, Baghel turns into some mild jokes.

If you think that the Congress is lagging behind in its early preparations for the elections and is building on its reputation, then Baghel is ready to debunk this notion. Covering three villages in each of the 90 assembly constituencies across the state, the incumbent CM is keen to be seen as the one who tackles local issues personally. Also, most of the schemes launched by him in office in the last 42 months—be it loan waiver, paddy procurement at MSP plus prices, schemes for rural landless laborers or dung procurement—focused on rural areas and CM Justice Want to make their impact on the ground. Through Bhent Mulkat, Baghel wants to see whether his political strategy of securing the hinterland is viable to win 2023.

In addition to fine-tuning his popular outreach strategy, Baghel also faces a challenge from within the party—health, rural development and panchayat minister TS Singhdeo and his loyalists were conspicuous by his absence, even when the assembly constituency was near Bhent. came under. The Mulkat program was at the home ground of the titular Maharaja of Surguja.

schemes for the public

What plans do Baghel have in store for so much and how will they help him politically in 2023? After coming to power in 2018, the first scheme the Congress government announced was farm loan waiver, an election promise. As a result, agriculture loans of 1.67 million farmers have been waived, costing the exchequer Rs 6,100 crore. Then there was the paddy procurement scheme – called the Rajiv Gandhi Kisan Nyay Yojana – under which farmers selling paddy to the government get Rs 2,500 per quintal for their produce, while being declared by the union as MSP (minimum support price). 1,940 as against Rs. government. The state offers some of the highest prices of paddy in the country, and procurement has increased over the years (see box). Farmers growing other crops are also paid Rs 10,000 per acre as input subsidy and incentive for crop diversification.

Then there is the new Gaudhan Nyay Yojana or dung procurement scheme, under which cow dung is purchased from farmers at Rs 2 per kg, which is converted into vermicompost and Rs 10 per kg to farmers and government departments to recover the cost. Sold accordingly.

Since the launch of the scheme in 2020, a total of 6.92 million quintals of cow dung has been procured at a cost of Rs 138.56 crore. Out of 310,000 cattle owners in Chhattisgarh, 211,000 have sold cow dung to the government. A total of 1.03 million quintals of vermicompost, used as a nutrient-rich fertilizer, has been sold so far. Arrangements are being made to mix cow urine in the scheme.

Though the scheme is not profitable at present, efforts are being made to give impetus to the rural economy through the use of unusable cow dung procured by the government. All Women Self Help Groups (SHGs) working in Gauthans set up under Gaudhan Nyay Yojana are making a variety of products from cow dung. From eco-friendly diyas to Ganesh idols, from candlestands to flower pots, there is a market for such things. Cement and brick made from cow dung is the next step.

The latest scheme to be directed in rural Chhattisgarh is Rajiv Gandhi Bhoomiheen Krishi Mazdoor Nyay Yojana, under which registered landless laborers will be eligible to receive Rs 7,000 per year. A total of 1 lakh laborers are expected to be benefitted.

Obviously, Chhattisgarh’s schemes involve putting money in the hands of the beneficiary, which is expected to translate into political support. In the recent Uttar Pradesh assembly election, this approach—seen in the Pradhan Mantri Awas Yojana, free ration to 15 crore people and a cash transfer scheme—was called a game-changer for the BJP. The Shivraj Singh Chouhan-led BJP government in Madhya Pradesh is giving Rs 4,000 to every small and marginal farmer in addition to the annual Rs 6,000 given under the PM Kisan Samman Yojana. 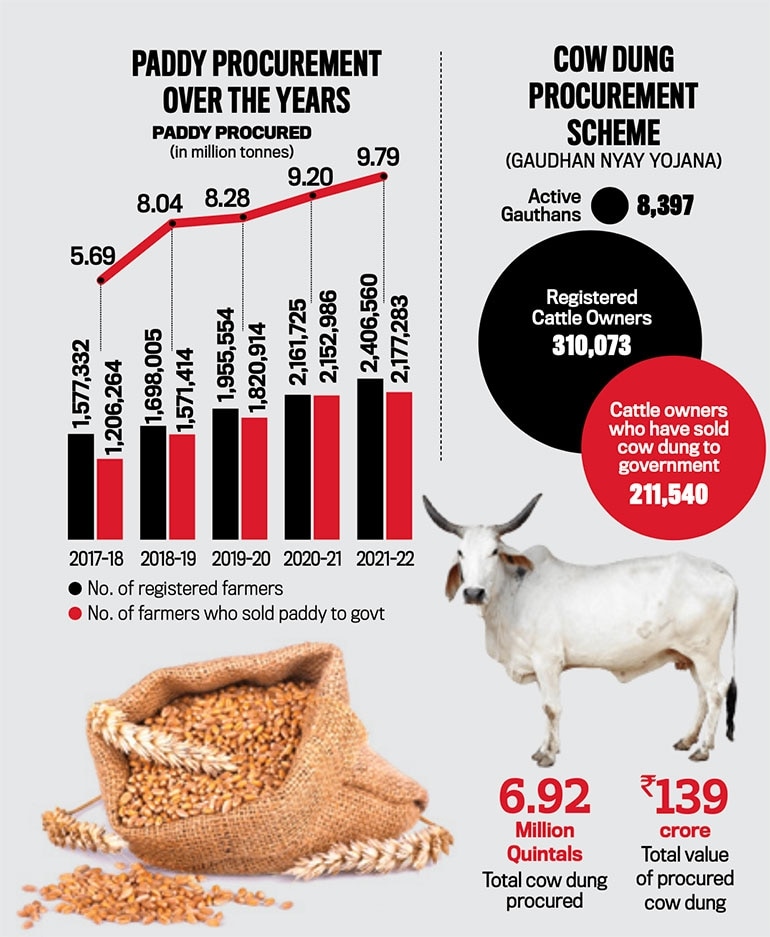 how do they play

“There are a total of 15 assembly seats that are completely urban, another 10 which are a mix of urban and rural and the remaining 65 seats out of 90 in the state are completely rural,” says Rajesh Tiwari, political advisor to the CM. Baghel. Hence the focus on rural schemes is not surprising.

Of the 90 assembly seats, 14 are in North Chhattisgarh’s Surguja division, while 12 are in southern Bastar division. At present, all these seats are occupied by the Congress. Most of the seats in Chhattisgarh are located in the central plains, which are largely populated by the farming community. While rural, agricultural/agriculture-oriented plans apply equally to the predominantly tribal and forested northern and southern parts of the state, the topography and prevailing economic practices prevent them from having a major impact. To address this, Baghel’s government has increased the purchase of minor forest produce (MFP) – an important economic activity – from the first seven items to 65.

There are some obstacles in front of Baghel. While the farming community in central Chhattisgarh seems to be quite happy, it is also the region where OBCs dominate and from where the BJP draws most of its support. He will have to find a way to win more Congress out of them.

Then there’s the aforementioned challenge from party rival TS Singhdeo, who hails from the tribal north and champions tribal rights through his relentless push for a strong Panchayat (Extension to Scheduled Areas), or PESA, Act, where gram sabhas have emerged. Tribal areas will have more rights. Chhattisgarh is in the process of making rules under the PESA Act. Singhdeo’s clout in Ambikapur (headquarters of Surguja district) was evident, with most Congress functionaries and leaders also abandoning Baghel’s Bhent Mulkat when it covered the Lundra and Sitapur assembly constituencies. Singhdev excuses himself citing engagement; A week ago he had gone to South Chhattisgarh to visit and inspect the departments under his charge, while the CM was in the north, visiting villages as per his Bhent Mulkat programme.

BJP has termed Baghel’s outreach program as a hoax. Former CM Raman Singh on May 8 in Surajpur, after a video surfaced of a woman reprimanding Baghel for blaming the police in a case, said, “Bhent Mulkat should be renamed as insolent and tainted.” As the criticism escalated, Baghel was forced to apologise.

Back in Rajapur, one of the villages in Sitapur assembly constituency, CM Baghel asked the audience if he had received all the paid installments of the paddy procurement scheme. Finally, Baghel announced plans to open schools, a stadium and a police post in the area, apart from making Rajapur a sub-tehsil.

After this the convoy of helicopters goes to Sarmana village. A large number of people come with personal problems, many of them related to land revenue management or securing caste or tribe certificates. Chhaya Mishra, B.Sc. The student tells Baghel that she comes from a family of Brahmins but is forced to take up a job. She demands toilets, a job and financial assistance. Baghel tells him about the dignity of labor and tells him about the schemes which can benefit him. He asks if everyone was getting the promised 35 kg of rice and kerosene under the PDS (Public Distribution Scheme). A girl asks Baghel to show him the school in which he studied. “We used to walk five kilometers to school every day,” says the proud CM, asking the district collector to organize trips for students who want to visit his school in Durg district.

Baghel would from time to time remind villagers of the rising inflation or LPG prices, taunting protesting BJP leaders when the cylinder cost Rs 450. With Assembly elections 18 months away, Baghel is clearly taking the waters test. The BJP has so far not matched him in energy and activity. But it won’t be like this for long. A fight is going on.