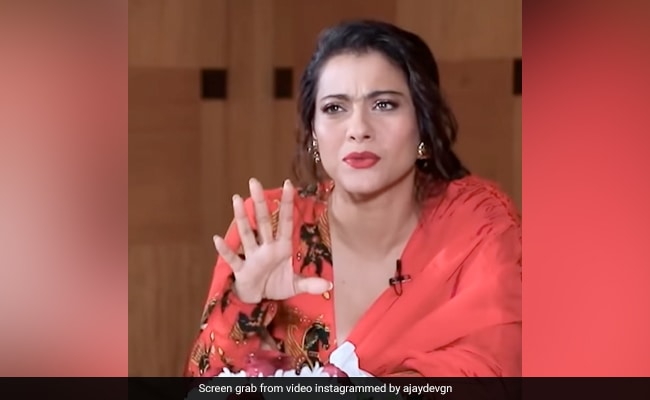 Kajol in a scene of the video. (courtesy: ajaydevgan)

Ajay Devgn and Kajol are a power couple in every sense. On the work front, being actors and collaborators, both have often set benchmarks for their peers. As far as their love story is concerned, it is no less than a fairy tale. But no one can ignore the laughter that comes in the relationship between the two. And, we have evidence. Ajay Devgan’s special [ROFL] Post on World Hearing Day. Of course, this includes his darling wife Kajol. Wait for a second, do we have to tell how much the actress loves to talk. Ajay has shared a video of Kajol listening patiently and having a cup of coffee. Along with the clip, the actor wrote, “Celebrating World Hearing Day today and everyday.”

Ajay Devgan and Kajol’s Tanhaji: The Unsung Warrior Co-star Sharad Keller has found the video to be quite relatable. He wrote, “Whi here, sir,” along with a teary-eyed emoji accompanied by a set of laughs.

Here is the video we are talking about:

Ajay Devgn’s post reveals a lot about the couple’s equation, and while it is funny, we are in awe of their chemistry. Remember the time when Ajay and Kajol attended Karan Johar’s chat show, coffee with karan, Season 6. It was a laugh riot. Both were just unbeatable. And, then, there was a moment when Karan Johar wanted to know the secret of their happy marriage. She asked, “So she talks and you listen to her?” To this Ajay jokingly replied, ‘No, she talks. And, I don’t listen.”

Ajay and Kajol have always celebrated each other’s achievements keeping their jokes aside. When Kajol was invited to join the Oscars committee among 397 cast and executives, “proud” husband Ajay Devgn left a lovely note on Twitter. He wrote, “Congratulations Kajol for being invited to the Oscars panel. Excited and feeling incredibly proud. Congratulations to all the other invitees too.”

Congratulations to @itsKajolD to be invited to #Oscar Panel. Excited and feeling incredibly proud.

Congratulations to all the other invitees too