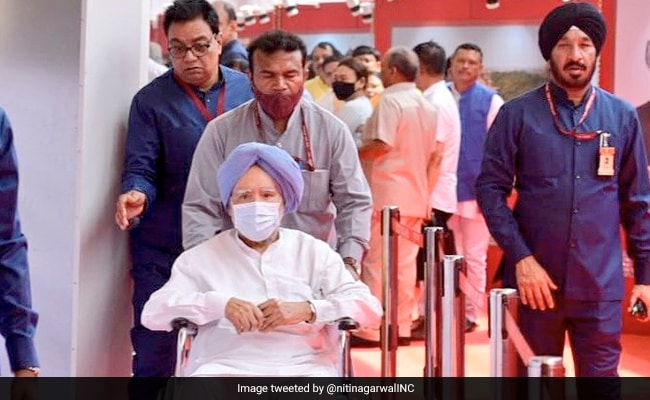 Manmohan Singh, 89, was first seen in a wheelchair at the Parliament House.

Former Prime Minister Manmohan Singh arrived in a wheelchair today to vote in the presidential election.

Voting for the election of the new President of India was held across the country by secret ballot in Parliament and State Legislatures today.

Manmohan Singh, 89, was first seen in a wheelchair at the Parliament House.

Visuals of the Congress leader casting his vote, assisted by four officials, were in wide circulation and led to several tweets by Congress leaders and their supporters.

Manmohan Singh and Prime Minister Narendra Modi were among those who were seen casting their votes in the first hour of polling.

Many Congress leaders called the former prime minister an inspiration.

Youth Congress chief BV Srinivas tweeted, “Sardar Manmohan Singh, who reached Parliament to discharge his democratic responsibility despite ill health, is an inspiration to all of us. May God bless him with good health and long life.”

Dr. Manmohan Singh ji casts his vote for the Presidential election in the Parliament.

History will always remember Sir as a visionary leader with unparalleled dedication to nation building.

Glad to see former Prime Minister Dr Manmohan Singh ji coming to the Parliament to cast his vote for the Presidential election. The nation remembers everything he did and every warning given before the 2014 Lok Sabha elections.
May God bless them with a healthy life. Singh is king pic.twitter.com/gaoYT9T8PP

Many wished Manmohan Singh to get well soon. “Sad to see him like this,” tweeted some Congress leaders, commenting on a video that showed officers helping him with a wheelchair.