Zmeevik Ballistic Missile: In the midst of the ongoing war with Ukraine, Russia is testing all kinds of weapons. Whereas it has never been seen before that Russia is developing weapons in such a large quantity, or is testing their capability. Now another similar news has come out. Which has revealed that Moscow is reportedly developing a new ballistic missile for its navy. Which can not only hit targets at hypersonic speed, but can also sink an aircraft carrier. These new missiles are very similar to the DF-21D and DF-26 missiles made in China.

This new missile is also being called ‘Carrier Killer’. That is, it can also destroy enemy vehicles carrying weapons. The missile has been named ‘Zmeevik’. Which is equipped with hypersonic combat equipment. Russia’s official news agency Tass has given this information quoting two sources close to the Russian military department. Taas quoted the source as saying, “The Zmeevik ballistic missile equipped with hypersonic combat equipment has been in the making for a long time. It is designed to target large surface targets, especially aircraft carriers.

Coastal Missile Unit may get missile

Tass quoted another source as saying, the new missile could be given for use in the Coastal Missile Unit of the Russian Navy. The special thing is that Russia is developing a new coastal missile system to launch another hypersonic cruise missile named Tsircon (or Zircon). With which, not only on land, but also in the air and water can target the enemy. Information related to this missile system was given in the Eurasian Times in May. As of now, only aerial and ground-based variants of the Tsirkon are known. Whose firepower is up to 1000 km and which can attack at a speed of 11,113 km per hour.

It has been described by Russian President Vladimir Putin as ‘invincible’. The Tsirkon is called a hybrid cruise missile or ballistic missile. Which is different from pure hypersonic missile. which are powered by an air-breathing scramjet engine. The missile can reportedly evade the most capable US air defense systems. The missile does not even come under the radar. The reason behind this is that the speed of the missile is very high. Due to which the air pressure in front of the missile creates a plasma cloud, which can also capture radio waves. Due to which it gets out of radar’s grip. 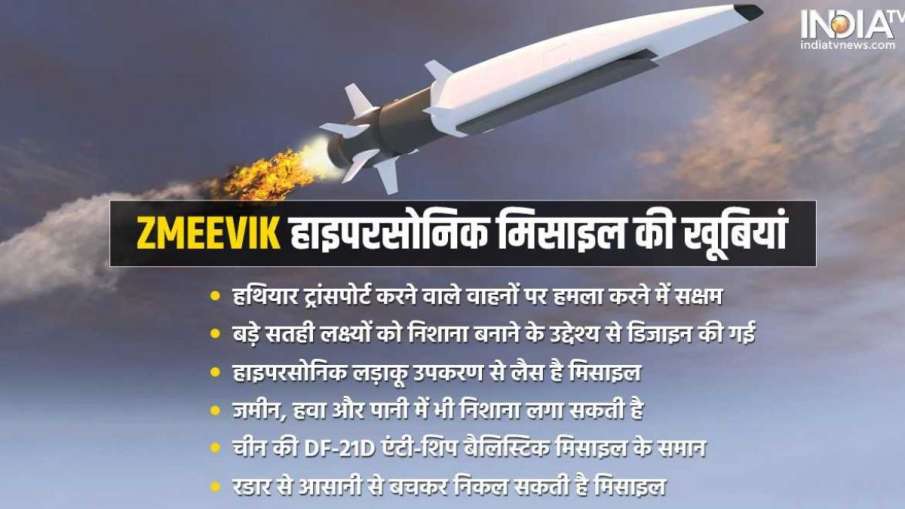 According to experts, it is also believed that the Tsircon missile can sink America’s most advanced aircraft carriers. It can very easily defeat the American Aegis Combat System. At the same time, both Russia and China are concerned about American aircraft carriers. Talking about Zmeevik, it is similar to Russia’s DF-21D anti-ship ballistic missile. The DF-26 is an intermediate-range ballistic missile. Which can destroy the enemy from a distance of 4000 km. This ground-based Dong Feng-21D (DF-21D) is also known as the ‘carrier killer’. Its range is 1500 km.

It is deployed by China as a strategy to avoid US military action on its east coast. Together with the explosive warhead, this missile can destroy the ship with a single target. The DF-26 missile is considered a major threat to the US. Its range is up to 4000 km. This could threaten the US military in large areas of the Indo-Pacific region. It can also be used against Guam’s strategic Anderson Air Base. Which is the territory of America near North Korea. This is the reason why many defense analysts call it the ‘Guam killer’.

5 Ways To Make A Delicious Lunch With Nutritious Gourds